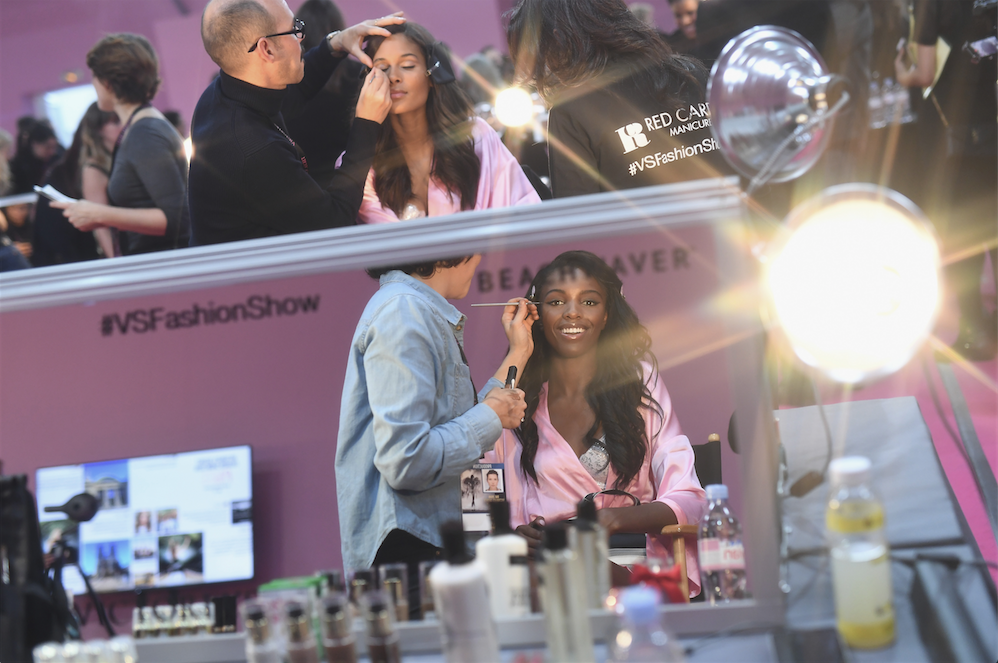 Sooooo the Victoria’s Secret Fashion show will be airing today at 10 p.m. ET  on CBS and, while there are certainly plenty of females out there who have absolutely no plans of watching the show  (because hello!? watching skinny ass perfect looking models strut around in their underwear isn’t exactly the greatest way to feel good about yourself) I, however, will be watching. Not only do I love the show, but I have always been a huge fan of the Victoria’s Secret brand. I can still remember purchasing my very first pairs of underwear from the store with one of my very first paychecks (what y’all know about that 5 for $25?!) and feeling like a real woman of the world instead of the 16-year-old geeky, insecure, band nerd that I really was. All of my clothes may have been unstylish and ill-fitting, but I was always wearing the cutest underwear underneath and, for whatever reason, that always made me feel better about myself/life. So, I might be sitting on the couch watching it sweats (looking absolutely not even close to skinny like any of the models walking the runway) while drinking a glass of wine, but whatevs. I’m pretty happy with the figure that I have. Anyway, back to this year’s show: I may not have been there physically backstage, but I did get all of the deets on the items used so you can re-create the look for yourself. Read on to find out! XO 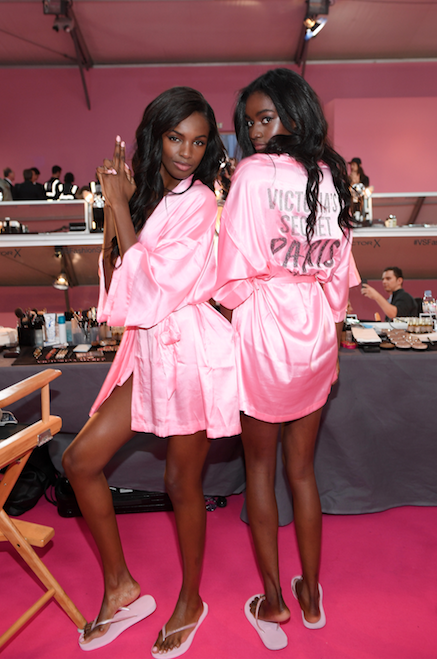 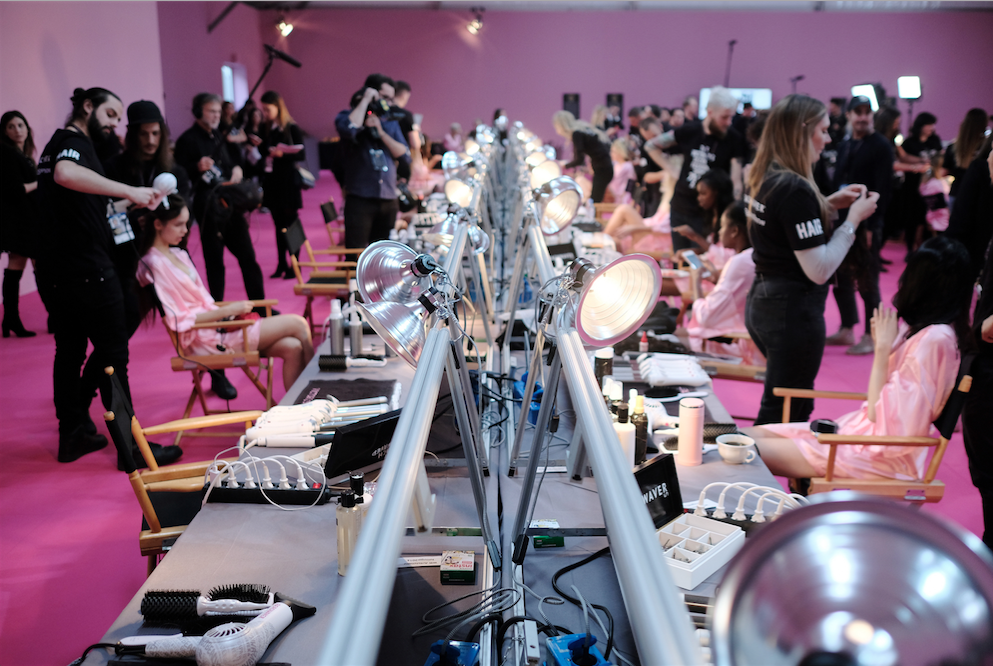 HAIR by Sarah Potempa, celebrity hairstylist and inventor of the Beachwaver

Bring all of your hair forward, and then divide it into clean, even sections using Darby Clips. Curl one inch sections of hair with the bigger Beachwaver PRO 1.25, working your way from the bottom up to the top. Tip:The biggest secret to create this look is to make sure the curls are going away from your face. The Beachwaver PRO makes it easy because you simply select L (left) or R (right) based on the side you are curling. Clamp the hair leaving al little bit of the ends out, and press “GO” to start the rotation and release “GO” to stop the rotation (you control it)! Hold for 3-4 seconds then release the barrel straight down. 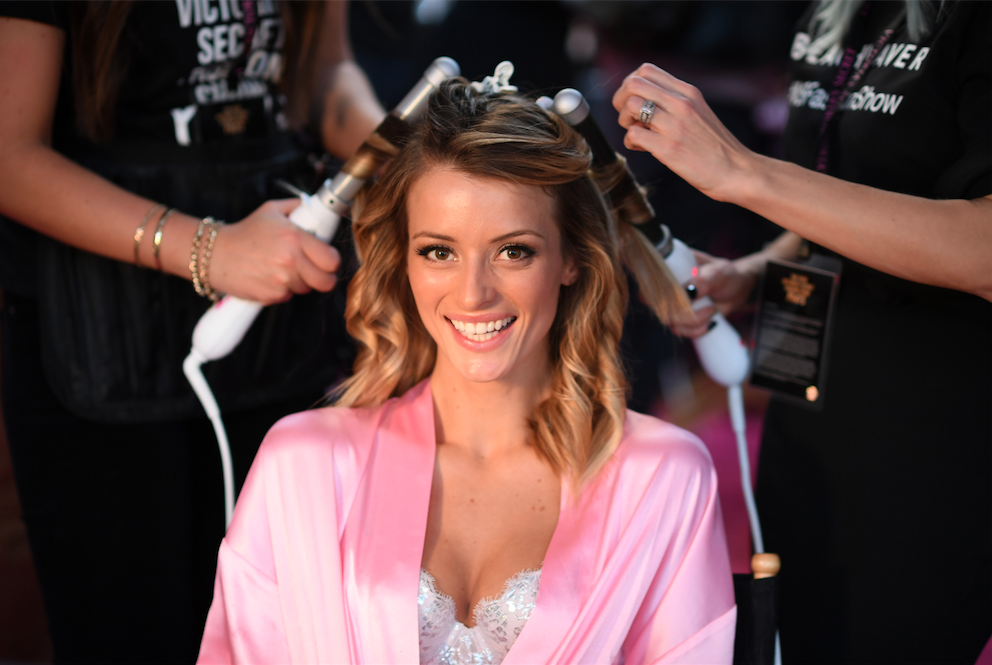 After you’ve curled your whole head with the Beachwaver PRO 1.25, wrap the curls and pin them to the base of the head with silver clips. Do your makeup and let the curls set, then remove them after a few minutes and the waves will be extra full and voluminous.

Lightly spray the On Set Styling Brush with a flexible hairspray and brush through the waves to smooth and separate the curls. You’ll have achieved the sexy, lived-in Victoria’s Secret look!

MAKEUP by Tom Pecheaux for MaxFactor

Fresh and soft hues were used to enhance the model’s naturally glowing complexions and individual features. Foundation was applied over concealer to create the most natural looking semi-matte finish. Cheekbones were highlighted in natural tones of crystal, peach and copper shades and finished with a  shine for a touch of glow. 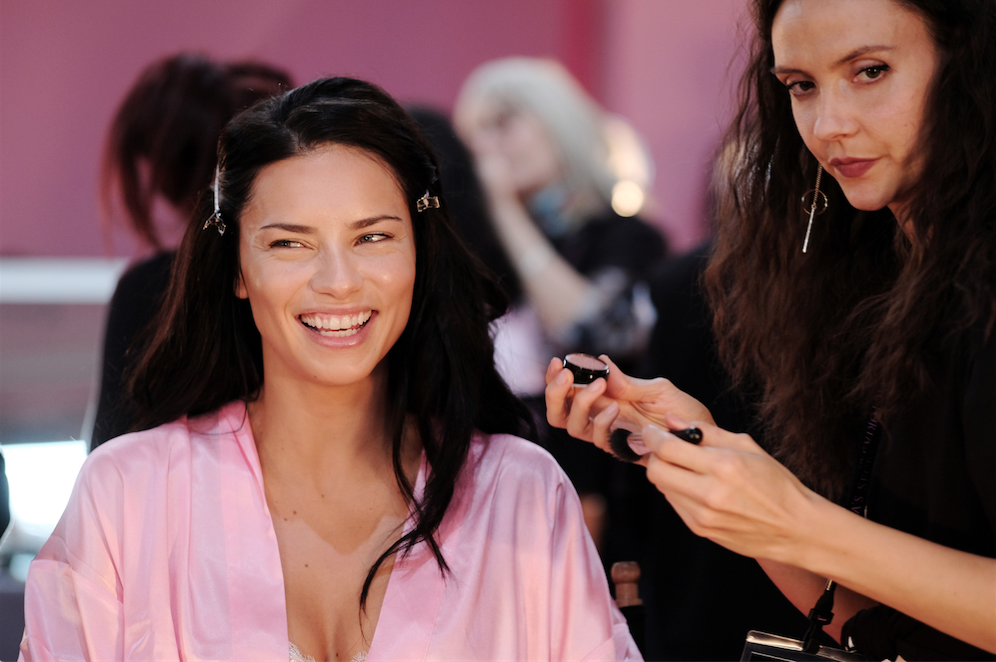 On the eyes, a mix of neutral shadows enhanced with a soft, subtle cat eye using liquid liner in grey topped with a brown pencil. Next, 2-3 coats of the MaxFactor False Lash Epic Mascara were added to extenuate the look. Allow to dry between layers for the most voluminous effect. 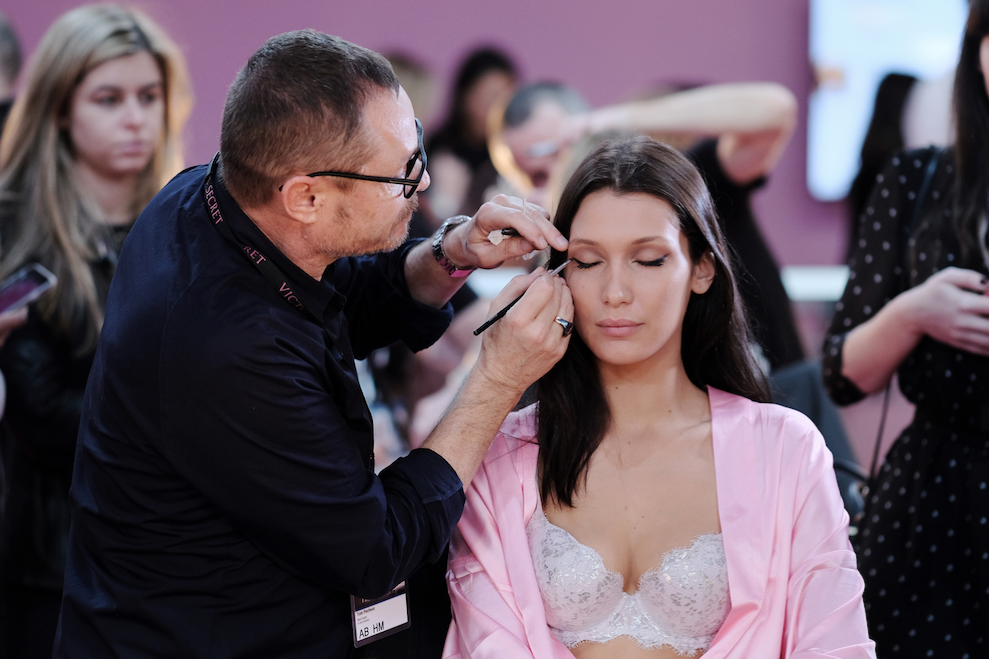 Lips were colored with Victoria’s Secret Velvet Lip Matte in Adored (a muted pink) and topped with gloss for extra shine.

The PINK models’ cheeks were enhanced with a rosier hue for a brighter flush while lips were a deeper shade of dusty rose with Velvet Lip Matte in Perfection. 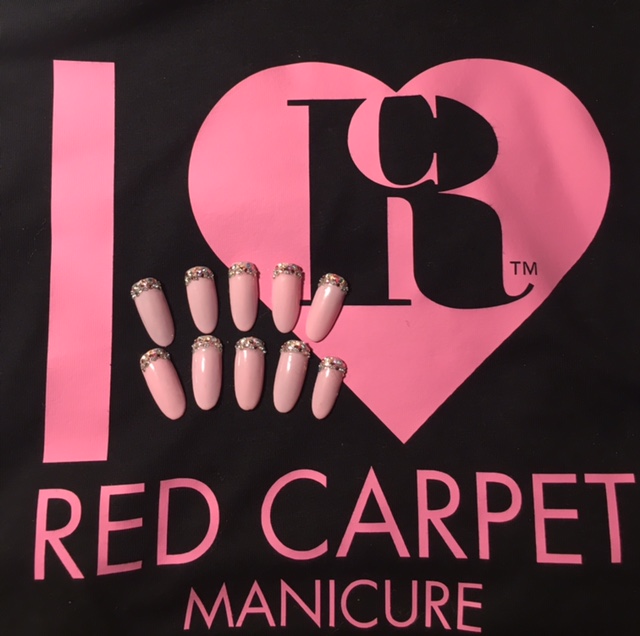 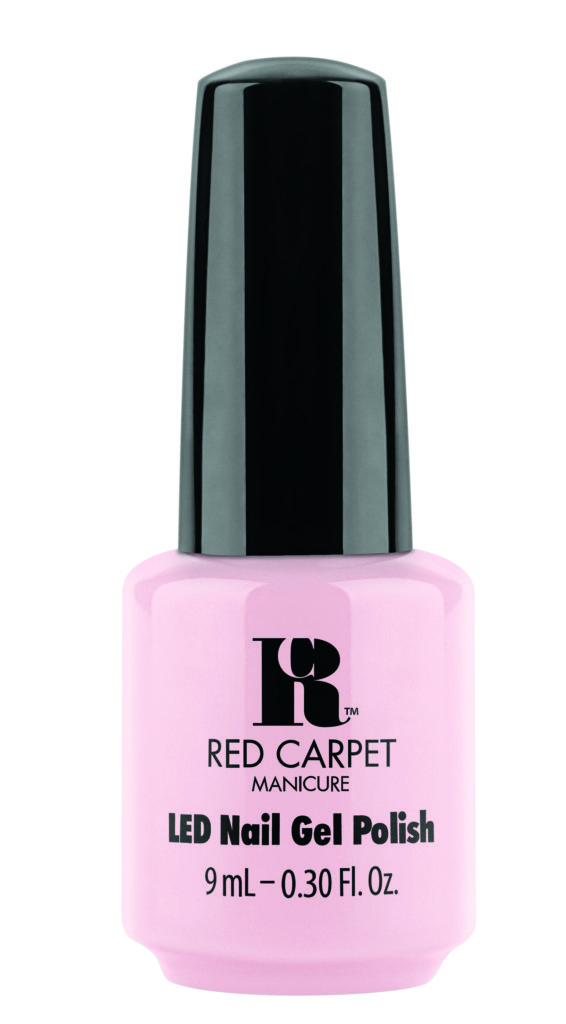 “I was so excited to be able to feed off the energy of the PINK Nation models, and to take a newer, younger, fresher approach to the traditional nails you have seen walking the VS runway. A manicure is the ultimate accessory, I think of it like jewelry. We started by punching up the color. I worked with Victoria’s Secret and Red Carpet Manicure to specially mix a gel polish color that perfectly complements the VS pink – and we named it Silk Slip (which will be available at RedCarpetManicure.com, Ulta and Nordstrom.com in 2017). Gel embellishment is a hot trend right now and Red Carpet Manicure makes it SO easy to create looks like the one we did for PINK Nation at home.  RCM and I decided to collaborate with Swarovski because they are such a large part of the show and embellish the nails with genuine Swarovski crystals – a multi-faceted cut of crystal that sparkles like no other.” – Elle 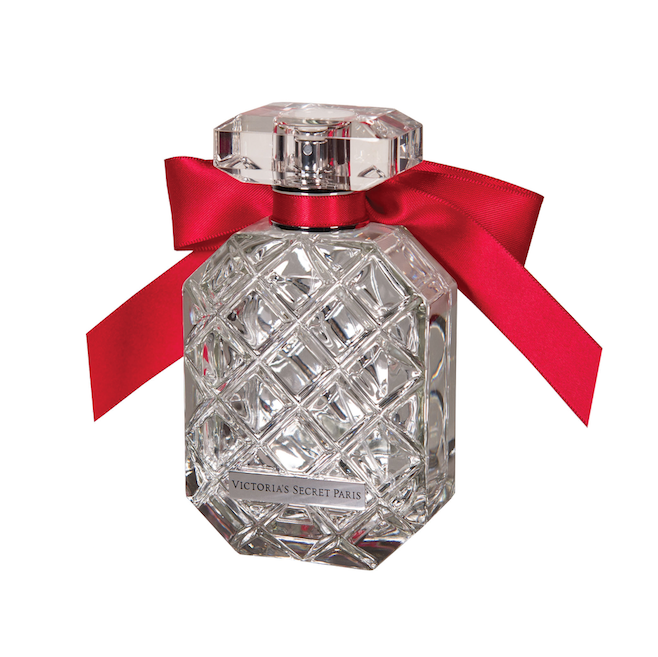 OH and you should also know that the brand also created an official fragrance for this year’s show, so even if there’s no way in hell you’ll ever look a Victoria’s Secret Angel (hi!!!! me because I just can’t stop/won’t stop eating sweet things smh), you can always smell like it! It’s called Paris Eau de Parfum and you can purchase it here. You obviously can’t sniff this page, so here are the notes: French Cypress, Night Blooming Jasmine and White Cedarwood. I’ll also go ahead and let you know that their PR sent me the scent and I love it! It’s smells fresh, light and not overbearing at all. 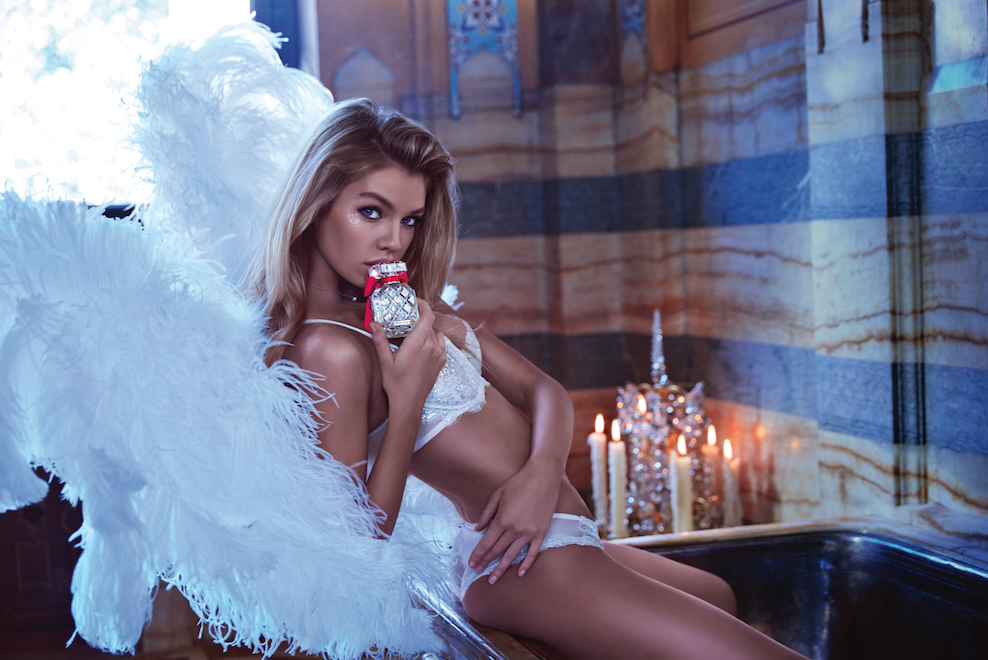 *All images courtesy of Victoria’s Secret

Shop here to create your own VS Angel look: