Let me first begin by saying I haven’t slowed down long enough to write a blog post in months, but since I’m sitting here in a hospital bed with orders to “rest and relax” I figured I might as well write something about my recent adventures….being that I’m a writer and all. [insert LOL’s here] So here goes:

Like most people, I tend to get so busy living life that I don’t pay proper attention to my body like I should. Granted, my life is pretty tame as compared to how it used to be when I lived and worked in Manhattan a few years ago, but it’s still pretty busy. Also, I’m still pretty consistently always tired. In addition to being a full-time graduate student and maintaining a 4.0 GPA [yes, I’m bragging about it because it’s hard work for me getting all of my assignments completed!] I also work for the University as a teaching assistant. I’m writing a book [well, at this point I’m editing my manuscript] and I love writing freelance articles even though I’ve had to slow down in that department in order to get my schoolwork completed. OH and I’m a single mom trying to figure out fun ways to make my five-year-old eat his veggies on a consistent basis. Then, there’s all the other things that come with being a woman of a certain age [ok, I’m 36] trying to exist in America. At the end of the day, I just want to make sure that my pores are tight, my skin is moisturized, I’m somewhat hydrated,  the roots of my hair are clean and that I can still fit into my clothes.

With all of that said, if I were paying adequate attention to my body, I would have noticed the signs weeks ago. The first happened after I ran up a flight of stairs to get to class. Now, being that I’m technically a New Yorker with years of running up and down flights of train steps under my belt, this is usually no big deal. But, this time I noticed that I was severely out of breath once I made it to the top and had to sit down in order to catch it. I drank some water afterwards, went to class and felt fine. My next sign came later that week at the gym. I was so excited to have crammed in a quick 30-minute work out session, but noticed that I was out of breath [again just like earlier that week] as soon as I got off the elliptical machine. After I sat down for awhile and was able to catch it, I made a mental note to lay off the latte’s and continued on with life. Fast forward to last week [Thursday to be exact], I started feeling not so well. I took a nap, which made me feel better, but still didn’t feel 100% right. I was at home in Marshall for a few days just relaxing with my son during the last of my Spring Break and we drove back to Dallas on Friday. I felt fine during the drive, but when I got out of the car, it felt as if all the blood had rushed out of my head and everything was tilting. The feeling didn’t last long, but it was weird, so I left all of my stuff in the car and got in the house as soon as I could because I wanted to sit down. That’s when the nausea kicked in and my chest started tightening up. I took a nap and my Aunt made me some soup [the best!] and I instantly felt better. I fell asleep that night and woke up Saturday morning feeling fine except for the tightness in my chest.

My plan was to go to the library and study for upcoming midterms for awhile and I went upstairs to take a shower. That’s when things went awry. I couldn’t catch my breath, my chest was hurting super bad, my heart felt like it was going to come out of my chest and I ended up laying on the floor. I could feel my vision narrowing in, but I refused to close my eyes because I knew that if I did something bad would happen. What, I didn’t know, but I just did some breathing exercises I learned from the Bikram Yoga classes I used to take when I lived in NYC [hey, it helped during child birth!] to try and relax and calm myself down. Thankfully the breathing exercises worked again this time and I was able to calm down, catch my breath and get back downstairs. My cousin came and took me to the hospital. I honestly thought I was having a panic or anxiety attack and that it was just me being dramatic. I made my cousin grab my backpack so that I could study just in case I ended up sitting in a waiting room for hours because I didn’t want to waste time that I could be using to study.  Once I arrived and said that I was having chest pains/problems breathing, two nurses at the front took me in immediately and hooked me up to a machine to check out my heart. My heartbeat line was super spiky and it was still beating out of control. They both looked at each other and said “We’ve got to get you to a room immediately,” put me in a wheelchair and whisked me into the ER.

From there, they took my blood, I had to pee in a cup, and had all these tests/x-rays run on me. It all happened really fast and [once again] I really thought the doctor was going to come and tell me that I was just having an anxiety attack. But, instead, I got two doctors who came into my room with very serious faces to tell me that I was extremely lucky to be alive right now and that there were two huge blood clots just chilling on my lungs; one of which was really close to my heart and causing it to work overtime. My official diagnosis? Pulmonary Embolism. Not good!  I was then put into the ICU, hooked up to a million machines [ok, not really a million, but it felt like it thanks to all of the wires everywhere] and told to just rest and relax. All I could think about was Aiden, school and work. Who was going to take care of Aiden and how was I going to take my midterms and get my schoolwork done?! Of course, my family swooped in and handled everything. My professors were like ‘”Bye, girl, please don’t worry about school and just get well” when I emailed them about my status. Outside of my immediate family, I didn’t tell anyone what was going on. Not for any particular reason, just because I really wanted to take the time to rest and think. It’s a very eye-opening experience to have someone tell you that you could have died when you didn’t really think that you were dying. Also that you are in a very “serious condition” and need to be monitored closely. There’s also the fact that I haven’t slowed down like this in years. I have no poetic words here about any of that just yet, but I just wanted to take the time to think about/take it all in.

I had surgery on Sunday morning [they inserted a small filter into me to make sure that no other blood clots travel up into my lungs] and was pretty doped up on pain killers for most of the day. I wasn’t allowed to pee alone or move about my room, but luckily the doctors haven’t placed me on a special diet so I’ve been able to eat pretty much whatever I want. By Monday, I was sitting up in bed and applying makeup [one of the nurses told me that not only was I the only conscious patient on the ICU floor, but that I was also the only one she’d ever seen applying makeup so carefully while sitting up in bed LOL]. I’ve had my blood pressure, temperature and blood taken more times than I ever knew was possible for one person. I’ve been poked with needles more than even when I was pregnant/gave birth. But, throughout it all, I’ve remained calm and in good spirits because not only am I grateful to be alive, but I am also happy that the doctors and nurses here have all been able to take good care of me in such a quick, efficient manner.

Surprisingly, I haven’t been afraid – not even when the doctors gave me my diagnosis. I’m just taking it all in stride which, in turn, has kept me very peaceful. Mostly because I know that things could be a lot worse! Anyways, that’s all I have for right now. I’m on blood thinners and definitely going to be in the hospital for a bit longer than I anticipated [at least I’m no longer in ICU!], so I figured I’d write a little something about it. Also, to let all of my friends and extended family members know that I am doing fine and to thank you for all of the prayers and well wishes sent my way! Also, sending an extra special shout-out to my Dallas SisterWife Devin who swooped through with a double stroller and left me with pretty flowers and a lovely gift basket of goodies. She’s the best! 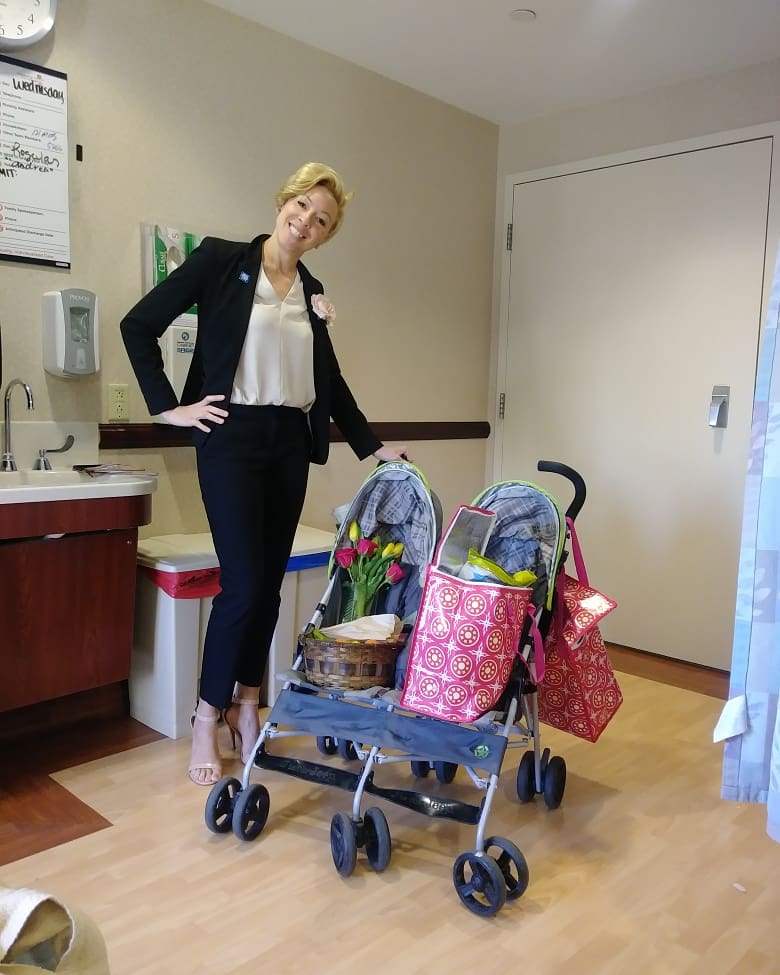 Now, I’m going to eat lunch and do some reading for my thesis research. [I don’t think that should stress me out too much since I actually really like my topic. Nope, my epic levels of nerdiness haven’t changed at all hahahaha]