All The Things I Did While Hospitalized

Guess who’s out of the hospital?! ME. Honestly, I thought I’d be in there forrrrrevvvverrrrr. Ok, that’s a little dramatic, but it’s the longest I’ve ever had to stay in a hospital. I’ve given birth (via an emergency c-section) and gotten out of the hospital quicker!

Having a pulmonary embolism is serious business because hello you need your lungs to breathe, but when caught in time (like in my case) it’s not necessarily a death sentence. Blood clots happen to tons of people (even Serena Williams!). I know people mean well by sending messages about certain foods to avoid, etc. but my doctors told me that my diet nor my busy lifestyle is the reason it happened. In fact, when they ran all of those tests on me, they found that I’m extremely healthy and in good shape which is what saved me from dying in the first place and has helped me to heal. My grandmother was also hospitalized last year thanks to blood clots in her veins, so it’s highly likely that it’s just a genetic thing that runs in my family which means there’s nothing I could have done right/better/more of to avoid it.

I’m grateful that the doctors and nurses took such great care of me but UGH. I’m one of those people who likes to be out and about doing stuff and being stuck in a room with orders to “rest and relax” took some serious time for me to adjust to. I meeeaaannn I thought I was resting and relaxing when I was studying or reading a book for school but NOPE. So, I honestly took the time to really rest (i.e. took all of the naps, which I haven’t done since I don’t even know when) and relax (i.e. binge watching all of the shows that I haven’t had a chance to see on Netflix/Hulu thanks to school).

It also involved me taking a little social media break. Obviously, I’ve been in denial when I say that I’m not really that hooked on social media. I don’t post on Instagram/Facebook nor do I tweet even half as much as I used to back in the day. But, clearly the obsession is still there because I like to read everyone else’s everything and at first it felt weird not to be scrolling through my social channels every 2.5 seconds to see what’s going on. But now, it feels weird that I was even doing that in the first place. I mean, I love everyone but honestly, social media cruising really does suck up too much of my time and I really do enjoy living in the moment. Not sure how long this feeling will last, but for right now, I’m just gonna go with it. I also ignored emails, which kinda made my fingertips itch for a second, but then I quickly got over it.  =) 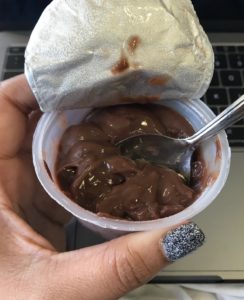 AND I ate tons of chocolate pudding, which made me extra happy.

Apparently this plan of really resting, relaxing, ignoring everything and eating lots of chocolate pudding worked because I immediately began to feel a million times better. I also did everything else that I was ordered to (you know, take my medicine, walk slowly around, stuff like that) and finally eventually my doctor came and told me I could go home. Yay! I still have to follow the same rules right now as I did in the hospital (you know, rest and relax), but it feels great to be home and back with my son who also happens to be my most favorite person in the world. Also, I’ve become more cognizant of how fast I rush through/do things around the house, so I’m learning to take my time more and slow down. Even though I no longer reside in Manhattan, I think the idea of hurrying up has been cemented into my brain more than I’d like to admit. I remember having to rush for everything – to catch the train to get to work, to make all of my meetings at work, to send out and answer 8 million emails throughout the day, blah blah blah. But, there’s really no reason for me to move so fast here because honestly the South is much more slower and while it drove me crazy at first, now I realize that it’s a good thing for me.

Anyways, I’m just going to keep with my plan of resting and relaxing right now and hopefully I’ll be able to resume my graduate school studies next week. In the meantime, thanks to all of my family and friends who have reached out with kind words, came by to visit or sent me flowers over the past couple of weeks. It’s a really nice feeling to know that you’re appreciated and loved. xoxo