One day, while minding my business, I received an email from a publicist for Berkley, Penguin Random House with information about this new book and would I like to read it? Naturally I responded “hell ass yes” because I love books. When it came in the mail earlier this week, I began reading it immediately and couldn’t put it down it was that good. And then I thought to myself “People should know about how great this book is!” so here’s my personal review of it, spoiler-free and everything. So, in the spirit of transparency, nope. This post isn’t sponsored, but I did receive the book for FREE.99 in exchange for review.  The Sun Down Motel by Simone St. James retails for $26 and will be available for purchase February 18, 2020. 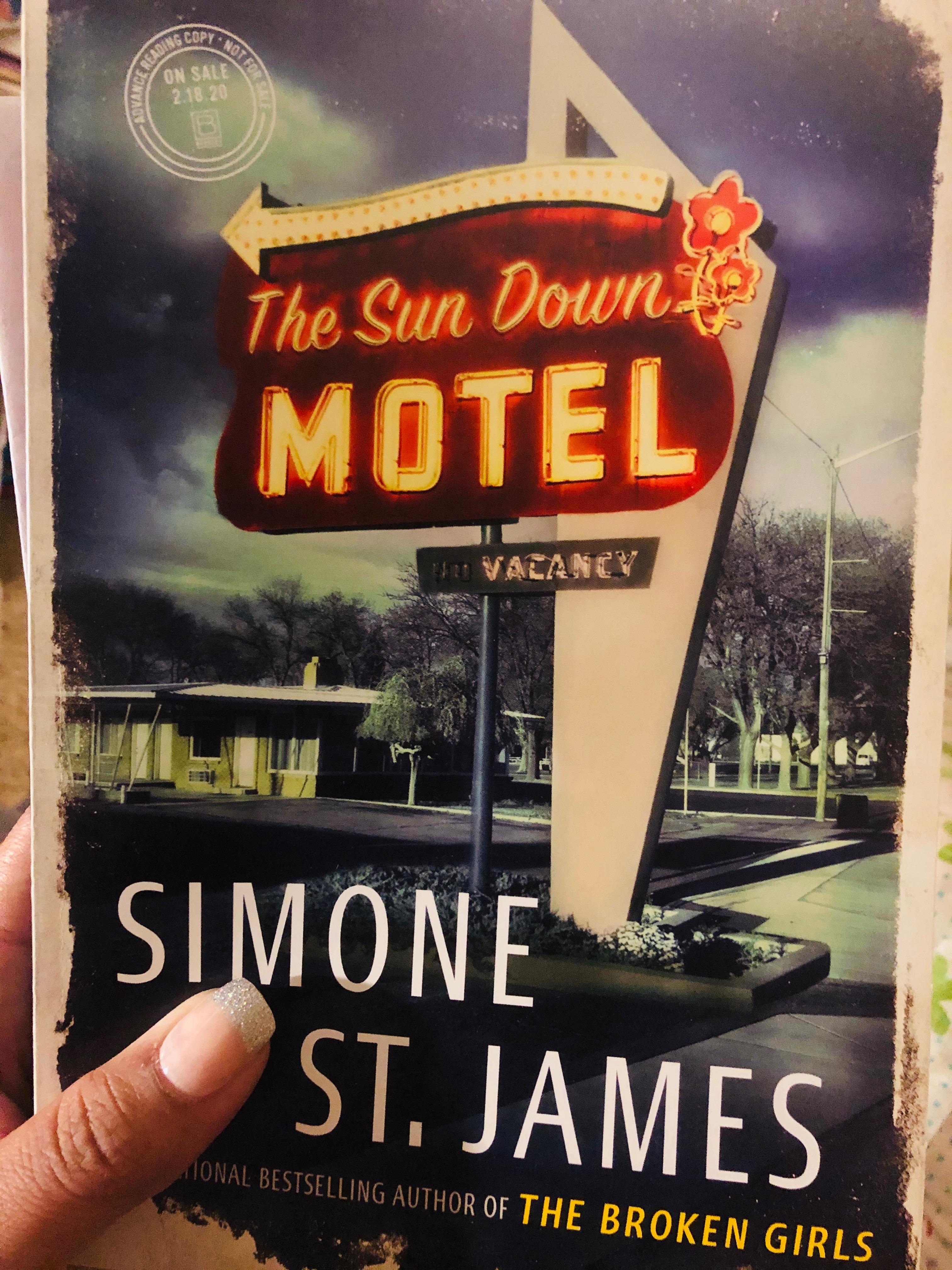 As mentioned above, once I started reading this book, I couldn’t stop and plowed through in approximately 48 hours. I just had to know what was going to happen next! And that, my dear reader friends, is why I loved this book because it keeps you guessing until the end. But, if you pay close attention throughout, you’ll notice that it wasn’t too hard to figure out what’s really going on. (Don’t worry, I won’t tell you.)

The story is told through the voices of two women: Vivian Delaney, a woman who runs away from home in the early ’80s to begin an acting career New York and (years later) her niece Carly, who drops out of college after her mother’s death to find out what happened to her Aunt Viv. Viv has been missing for thirty something years and the family assumes she died, although no body was found. Unfortunately, she doesn’t make it to Manhattan, but she does land in a small, weird town in upstate New York called Fell. And this is where the spooky Sun Down Motel comes in.

Viv lands a job at the Sun Down working the night shift. The entire place is hella scary and haunted, but it’s through the ghosts that she’s able to figure out that something ain’t right about one of the guests who checks into the hotel. There’s also the scores of unsolved murders within the town itself that make for an overall scary setting. Naturally, Viv falls down the rabbit hole in an effort to solve the mysteries. But, why did she disappear? And, if Viv is dead, where is the body?!

Enter Carly Kirk, Viv’s niece who, in 2017, decides to drop everything in order to find out what happened to Aunt Viv. Naturally, she comes to Fell where she instantly finds a strange, but nice, roommate that works to help her solve the mystery. And she gets a job working the night shift at – where else?! – the Sun Down Motel. The ghosts are still there and, just like they did with Aunt Viv years earlier, they reach out to Carly as well.

Even though Viv and Carly are separated by thirty plus years, their narratives tell the story of what really happened to all those murdered women in (and around) Fell, New York and why the cases were never successfully resolved. A theme that runs throughout the novel is how dangerous the world can be for females but also how, when women work together (regardless of whether they’re dead or alive) great things can happen.

I am a big fan of Simone St. James and enjoy her writing style. She always gives just enough detail in her stories without it being overbearing or cumbersome. The story lines are the right mix of spooky and weird and I can tell she puts in work fleshing out her characters because they’re always so real to life. The only downside to this book is that it sometimes lagged along, but maybe that’s just because I wanted it to move faster at times. Overall, The Sun Down Motel is an enjoyable read and one I recommend.